Several times, kind-heartened people contacted me on Quora. Seeing my profile there, they came to the inevitable conclusion I need more money. Since they had nothing better to do, they did not hesitate and offered me the opportunity to invest my savings with a 20% profit a week.

Intrigued, I started calculations, in which I and a loan with 10% interest per annum made me incredibly rich. You know the stuff. A not suspecting bank, in which well-paid experts have no idea they can win 20% a week, will give you money, which as it turns out you can pay back in one week and the rest - the rest is your pure profit.

Let me tell you straight. I am an idiot. Instead of taking the opportunity myself, I wrote back to those kind-hearted fellows and shared with them the secret of eternal wealth. To my huge surprise, they never bothered to thank me, probably on their hasty run to the nearest bank.

Watching them being so selfish and not caring as soon as after they got their chance to live their American dream, I gave up on investment. The money will never ruin my character! I swear!

But wait a moment! Isn't it a little too late for this? The more time I spend on the Internet, the more I am sure I am an evil person.

For instance, while numerous selfless writers keep advising strangers on how to earn money in no time, I, after checking my publishing history, have sadly only the record of pessimistic or downright discouraging articles. I was ridiculing poor Twitter users, undermining consumer's resolve to sort plastics, promoting Japanese or Chinese novels (who cares about them, anyway?), and what is the worst, I was even bashing my own online novel.

Would you believe this? I will not blame you if you leave now. What if the level of dementia I tend to exercise is contagious?

Still here? If so, allow me to amend my sins while giving you sincere advice on how to avoid committing the gravest mistake ever.

When people out of good nature write their articles for others, they evidently fail to realize that resources are limited, especially when we speak of money. One million dollars divided by ten is a nice sum to have, but as soon as the secret is revealed and the advice gets into too many listening ears, the share you can obtain diminishes.

Thus, it is in your best interest to stop writing those articles. Don't do that! Don't help strangers to earn your money, keep the secret for yourselves.

The moment you grab the pen in the selfless need to write another article on how to earn thousands of dollars on Medium, Twitter, or wherever else, slap hard your face and resist the urge.

If even such a repeating mantra cannot pour some sense into your generous brain, do not hesitate and chop your fingers.

I and the whole world will bless your name.


Posted by Pavel Morava at 11 November No comments:

How (not) to tame English?

To answer and disappoint my reader, I have no idea. I've been writing for the web for several years, and the only conclusion I am reasonably sure of is that I cannot describe any workable method to do it. However, since I've tested many approaches so far, someone may find my journal educational. 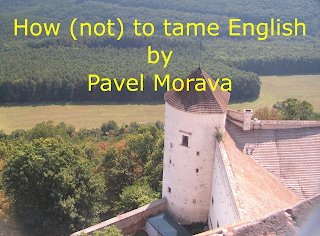 At first, allow me to explain why I bother with English, which is not my mother language, and Grammarly keeps nagging about every tenth word I use. Well, you know - everyone is littering the Internet, and I tend to do what the others do.

Anyway, the first method I would like to recommend to your attention exploits the "I don't care!" attitude. Its magic dwells in commenting while disregarding any grammar and spelling. The primary purpose is to deliver the message, not to care about insult to the language or potential recipients.

It is a straightforward and easy-going approach. I used it often with great success. Some native speakers might even appreciate it since observing the dumb foreigners cultivates their superiority complex. Without a doubt, native speakers beat the rest of the world in this game.

But not only that!  By solving the riddles presented in texts, enriched by cryptic fragments, the intellectual satisfaction competes with ancient hieroglyphs' decryption. I have spent plentiful happy minutes myself over writings of the poor souls, who struggled with English more desperately than I do.

As a creative fellow, I have extended the before-mentioned methodology by something I would call the "Intuitive Grammar." There is a particular moment in your meaningless life when you come to the false conclusion that you have become an advanced speaker.

Even though you have forgotten all the rules and exceptions they pushed into you at school, you feel empowered with your recent skills. So you begin using tenses, particles, and idioms you have seen somewhere under the false pretext you understand them correctly.

This hilarious self-mystification leads to extraordinary enhancement of your written delivery, so you do not hesitate to ornament your sentences with refined gems, which bear the opposite meanings than you initially thought.

Furthermore, if you tend to take advice from the invention called Thesaurus, it can happen to you as it happened to me that after stumbling upon the two-month-old article, you have no idea what the article was about.

If even such an embarrassment fails to stop your progressing megalomania, the day may come when you decide to write an English novel. In that case, a tiny worm of doubts may appear and force you to reevaluate your ability to do so. Having absolute and excessive confidence in your learning skills, you accept the quest to conquer English grammar and vocabulary, meticulously polishing every sentence and every word you put down on the paper.

The journey can quickly become an annoying hassle as soon as you realize that English lacks any widely accepted standard and formal rules. More than anything resembles a poorly evolved construct, a muddy piece of sheer shapelessness.

Only the brave or stupid endure after such a finding, and it depends solely on the adventurer's unyielding character, whether or not he continues on the journey. After all, if Britons and Americans could not have standardized their language in the way the less worldly countries had done about one century ago, what prevents you from maiming their language in a fashion you deem appropriate, suffice it to declare own ignorance a personal style of writing?

This phase, I would call "Spiritual Enlightenment." Since endless queue of English lectors, preaching on YouTube, demand you to stop translating in your head, you proudly declare English your second language and expose your already damaged brain to new suffering.

By switching to "I must not translate" self, you earned the phenomenal opportunity to express the complex ideas in the manner which corresponds to the abilities of ten years old child handicapped by incurable mental issues.

Overnight, the previous fluency transforms into hopeless stuttering, and you enviously watch the others able to bring thousands of words a day where you hardly birth hundreds in a week.

Personally, I surprised myself by the tenacity with which I crafted more than one hundred pages of Sovereign. There was a period I was writing about five hundred words a day. It did not last for long as you may easily deduce from my submissions on RoyalRoad.

The final proof of my inferior intellect? It took me years to understand that this road leads nowhere. My "Big comeback to the Earth" formed this article, written in my mother language in a half of hour, the only obstacle being my pondering how the hell I was going to translate my Czech idioms into understandable English. I was afraid that by not translating it, I would harm my international audience, which counts if I am not mistaken about twenty random passersby.

Posted by Pavel Morava at 13 September No comments:

Do you prefer physical books over e-books? And why?

Ten years ago, I would have answered otherwise, but as of today, I prefer e-books over traditional books. I have changed my mind because of three main reasons: availability, ecology, and content.