To support or not to support? 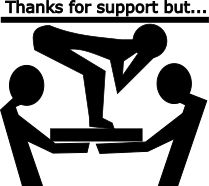 Allow me to share my experience from ancient ages, from the time when the grass was greener and I was younger.

Under impression of watching anime named Claymore, I had decided to write a fanfiction. Mind you, that text had nothing in common with original story as it borrowed only background and girls waving huge swords. Well, those girls, if I recall correctly, were half humans and half monsters.

The plot and related story bear no importance. I published several chapters on some web for teenagers; the web had no affiliation with anime at all. Curious how would  young people react, I offered them novel based on Japanese cartoon show, written in typical European way.


The criticism was rather harsh but few positive reactions made me continue. One of my supporter fought bravely to defend my work.

The problem was I didn't like his comments much. From my perspective, his naive attitude and lack of understanding  did more harm than good. Not to mention I had an impression, when comparing him and my critics, that the latter showed more maturity in their approach - take in the account we speak about teens who presented their opinion in crude, unpolished manner; just replace them with your typical English teens with all possible curse words, and you get the picture.

On the other hand, I felt I should have been supportive, and that's why I kept upvoting his comment even against my better judgment. After all, no author actively tries to discourage his readers. Just imagine an politician suggesting his voters not to vote for him, because his voters obviously misunderstand politics he tries to promote. Quite unthinkable, isn't it?

More than ten years later, I still wonder how to solve similar situation. How to treat people who support you by means or arguments,  you don't agree with?
Posted by Pavel Morava at 14 May